The Government on Monday issued an amber temperature warning, the second highest possible, with much of Britain forecast to endure soaring temperatures in the coming days.

“Heat health” level three alarm has been announced by the UK Health Security Agency for southern and central England, highlighting the need to prepare for a second summer heatwave and the potential risks to public health. .

The agency said temperatures are “expected to rise throughout the week” and could reach mid-30s in the south of the country. The warning will be in effect from midday Tuesday, August 9 to 6:00 p.m. Saturday, August 13.

A level four red alert – indicating a serious incident requiring urgent response – was issued last July unprecedented heat wave For the first time in the UK the temperature has risen above 40C.

The latest alert to be issued is the Met Office forecast Another round of very hot and dry weather for England – conditions that have brought the country close drought. Last month was The driest July in the UK since 1935The dry weather caused three water utilities to announce a ban on the use of hoses.

Last week, Environment Agency warned that if the heat continues “many parts of the UK will be in a dry state”. Over the weekend, Environment Secretary George Eustice called for more widespread bans on the use of flexible hoses.

He wrote in The Sunday Telegraph: “I strongly urge other water utilities to act responsibly to protect and preserve our water supply during these very dry times. 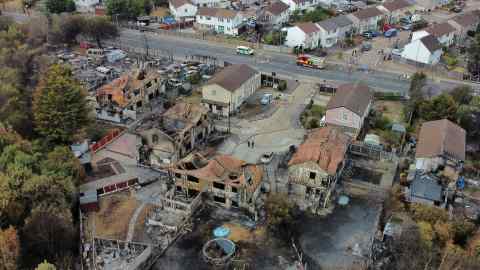 Tony Wardle, deputy director of meteorology for the Met Office, said on Monday that large areas of the UK could experience a heatwave this week. Temperatures could peak at 35C or 36C, with the hottest areas expected to be central and southern England and Wales on Friday and Saturday, he added.

The government says high temperatures and dry conditions have created wildfire risks, such as those that broke out across the country in July.

Agostinho Sousa, head of extreme events and health protection at UKHSA, said: “We want everyone to safely enjoy warm weather when it arrives but remember that heat can take its toll. quick effects on health.”

He added: “It is important to ensure that those who are more vulnerable – the elderly living alone and those with underlying health conditions – are prepared to deal with hot weather.

Ukraine’s turbulent history since independence According to Reuters The housing market ‘corrects’ intensifies as layoffs hit Redfin and Compass. This interactive map explains why