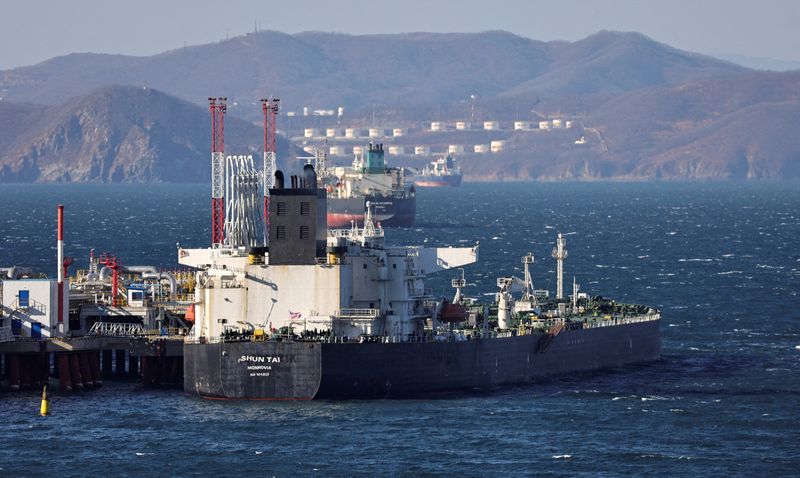 © Reuters. FILE PHOTO: Crude oil tanker Shun Tai moored at the port of Kozmino in the Gulf of Nakhodka near the port city of Nakhodka, Russia, December 4, 2022. REUTERS/Tatiana Meel

By David Lawder and Timothy Gardner

WASHINGTON (Reuters) – When U.S. officials first floated the idea of ​​limiting the price of Russian oil exports in response to a planned European embargo in March, they pledged to reduce revenue to the engine. Russian war machine, while avoiding a spike in oil prices.

A price cap of $60 per barrel on seaborne crude imposed by the G7 democracies and Australia on Monday solved that, in line with current market prices.

Analysts say the cap will have little immediate impact on the oil revenues Moscow currently earns. Russia said on Monday that the cap would not affect funding for its “special military operation” in Ukraine.

Ben Cahill, an energy security expert at the Center for Strategic and International Studies in Washington, said the price cap is “an unflattering compromise that will do little to reduce our oil revenues. Russia” compared to current levels.

“I really think the main goal of the US Treasury Department is to lift the EU embargo on Russian oil exports,” Cahill said.

Russia’s Urals blended crude for delivery to Europe was offered at an average price of $55.97 on Tuesday, below the ceiling and down from $61.35 on Sunday.

Benchmark prices fell to their lowest since January on Tuesday at just under $80, extending a downtrend as growing concerns about global demand offset any upside impact from the cap. price for Russian oil sales.

Officials at the US Treasury Department, the driving force behind the G7 price ceiling, sought to balance out the reduction in Russian revenue and maintaining supply, although market prices sometimes influence that. this, a senior finance ministry official told Reuters.

“There have been times when Brent has fluctuated wildly over the past eight months, making us more worried about one than the other, but overall, we created parallel targets of equal importance. “

The official said the price cap is “institutionalizing” existing market rebates, arguing that the price ceiling created them.

Analysts also attributed the drop in global oil prices to the weakening global economy, the COVID-19 lockdown measures in China and the OPEC+ group’s decision to keep output steady.

PRICES, INCOME OF RUSSIA DOWN

At the current price ceiling, Russia would earn about $10 billion to $15 billion in oil export revenue per month, said Bob Yawger, director of energy futures at Mizuho in New York.

This is much lower than the more than $21 billion a month Moscow earned in June, according to estimates from the International Energy Agency (IEA), when Brent topped $120.

At the current oil price cap, Russia is making roughly what it was before rumors of an invasion of Ukraine started driving prices up. Russia made about $15 billion in June and July 2021, before Russia increased its troops near Ukraine.

The $60 price cap was agreed on Friday after intense debate. Poland, Lithuania and Estonia argued that the European Union countries should introduce a ceiling as low as $30, close to the cost of Russian production, after an initial proposal of $65-70.

FLEXIBLE MONEY IN THE FUTURE

As crude oil prices fell, the language around the price cap from US officials evolved from “reducing” Russian revenue, to “restricting” future cash flows.

US Deputy Treasury Secretary Wally Adeyemo told the Reuters NEXT conference in New York on Thursday that the cap “will result in Russia earning less revenue in the future and having less money to invest in conducting business.” war.”

“It’s important to remember that we’re starting at $60 but we’re likely…to continue to use this price cap to limit Russian revenue over time,” Adeyemo said.

In July, Adeyemo said the goal was to eliminate the “risk fee” or price increase that Russia had included

oil market with the invasion of Ukraine, to give Moscow less money to “pay for their war machine.”

If Moscow makes good on its threats to cut production instead of selling oil to countries that comply with the cap, prices could move higher, and that could pose a problem for the United States and its G7 allies.

U.S. officials “want to avoid that at all costs,” Mizuho’s Yawger said, adding that this could mean “sudden support for Ukraine begins to dry up.”

The oil market has changed dramatically since March when Russia’s invasion of Ukraine sent prices skyrocketing.

Estimates by the Internal Finance Department around that time suggest that global crude oil prices could exceed $150 with the EU embargo in place and no mitigation measures in place.

And with the IEA predicting that the Russian oil market could lose 3 million barrels per day if the most stringent EU sanctions are imposed, Barclays (LON:) and Rystad Energy warn that oil prices could hit $200.

A source briefed on the Biden administration discussions said: “The Treasury Department’s real motivation after March was primarily to preserve Russia’s cash flow against EU sanctions, which they don’t think it’s a good idea”.

“They believe that if oil prices spike, it will not only hurt us economically and politically, but will also hurt Western support for Ukraine,” in the fight against Ukraine. Russian army.

As the G7 formulated the plan, India and China grabbed hold of the heavily discounted Russian oil and are expected to continue buying large purchases beyond the ceiling price, a move endorsed by Finance Minister Janet Yellen.