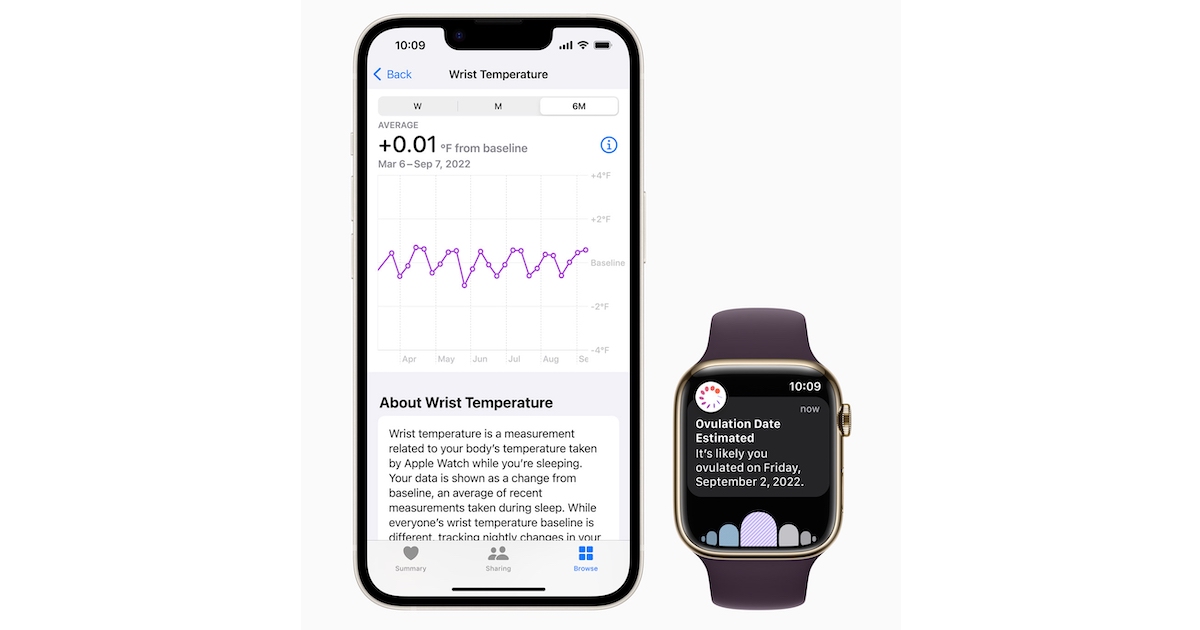 Apple unveiled the latest versions of its Watches on Wednesday, including new temperature sensing capabilities for ovulation tracking and auto accident detection.

The Apple Watch Series 8, which will retail at $399, includes two temperature sensors, one near the skin on the back of the device and one under the front display. Apple says that these sensors can reduce bias from the environment, and changes in body temperature at night can be used to estimate when you’re ovulating. Temperature data can also improve cycle predictions.

The new device also includes collision detection, which uses a new gyroscope and accelerometer to detect potential accidents and check with the user. If they don’t respond after 10 seconds, the Watch can alert emergency responders and contacts with location data.

The lower-priced Apple Watch SE, which will start at $249, will include basic activity tracking, high and low heart rate notifications, and emergency alert features, including crash detection tools new. All devices using the new iOS16 and watchOS 9 can alert users if their cycle tracking history shows deviations, such as irregular or spotty periods.

The tech giant also unveiled the Apple Watch Ultra, geared towards endurance athletes and outdoor explorers. It includes new temperature sensing and collision detection features along with tools for more accurate diving and water sports and GPS. It will retail for $799.

Cycle tracking and privacy became a hot topic after the Supreme Court’s Dobbs decision overturned Roe v. Wade. Some privacy experts have raised concerns that the data could be used to determine if a user has had an abortion. Many popular cycle tracking apps are available share data with third parties.

Apple adds cycle tracking for the first time three years ago. The company says that when a user’s iPhone is locked, health and fitness data is encrypted on the device and can only be accessed with a passcode, Touch ID, or Face ID. When using the default two-factor authentication and passcode, health data backed up to the cloud is end-to-end encrypted, so it can’t be read by Apple.

“Only with your explicit permission can your health data be shared and you have granular control over the types of data you share and with whom you share it,” Sumbul Ahmad Desai, Apple’s vice president of health, said.

There’s a lot of competition for health and fitness trackers. Google recently announced three updated Fitbit wearablesInspire 3, Versa 4 and Sense 2. Tech giants have plans too releasing its own branded smartwatch this fall.

Others in the space include Amazon, SAMSUNG and Garmin.

How Hailey Bieber styled a Barbiecore mini dress for fall What a high-risk pregnancy looks like after eating dobbs