The extent of wasting, 10 of the 21 states and union territories have reversed on the parameter, and the numbers are more in line with NFHS-3 levels (2005-06). Nagaland and the union territories of Jammu and Kashmir saw a gain of 6%.

Karnataka was the top-performing state, with a decrease from 26.1% to 19.5%. Meghalaya and Goa both saw improvements over the previous survey.
All five union territories and 11 states saw an increase in the number of underweight children. There was only a slight to moderate reduction in the levels in Bihar, Gujarat, and a few Northeastern (NE) states.

However, the percentage of underweight children increased by approximately 3% in wealthier regions like Kerala and Telangana. In Kerala, the levels increased from 16.1% to 19.7%, and in Telangana, they increased from 28.5% to 31.8% (1✔ ✔Trusted Source
National Family Health Survey (NFHS-5)

Go to source,3✔ ✔Trusted Source
What has NFHS-5 revealed about malnutrition in India? 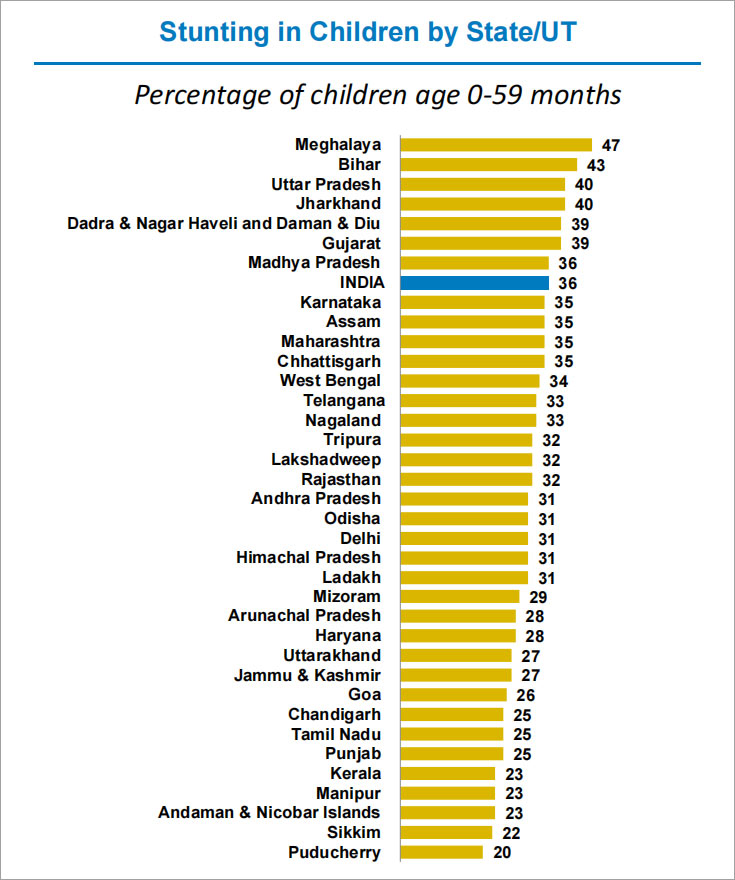 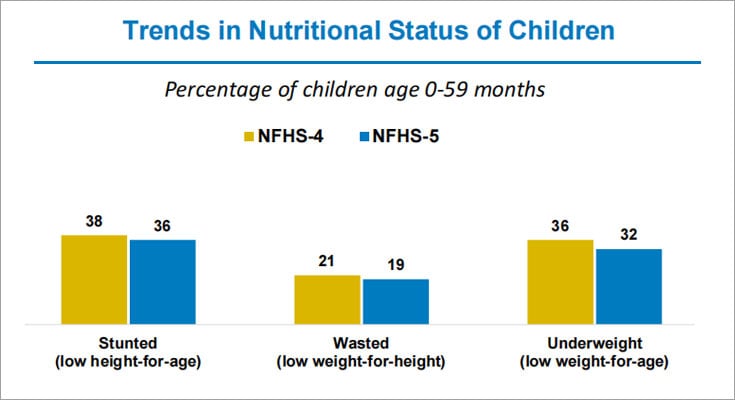 Nutritional imbalance is measured by the indicators stunting, wasting, overweight, and underweight; this imbalance leads to either malnutrition or overweight.

Chronic or recurring undernutrition throughout pregnancy, early childhood, and adolescence causes stunting. Children that are stunted may never grow to their fullest physical and intellectual potential.

Wasting is a potentially fatal condition brought on by inadequate nutrient intake and/or illness. Wasting is characterized by a rapid decline in nutritional status over a brief period of time. The cause of nearly half of all deaths in children under the age of five is undernutrition (2✔ ✔Trusted Source
Child Nutrition

Height-for-age is a measure of linear growth retardation and cumulative growth deficits. Children whose height-for-age Z-score is below minus two standard deviations (-2 SD) from the median of the reference population are considered short for their age (stunted), or chronically undernourished. Children who are below minus three standard deviations (-3 SD) are considered severely stunted. Sample: Children under age five years.

Children whose weight-for-height Z-score is more than 2 standard deviations (+2 SD) above the median of the reference population are considered overweight. Sample: Children under age five.

According to the Global Nutrition Report 2018, India tops the list of nations with 46.6 million stunted children, followed by Nigeria (13.9 million) and Pakistan (10.7 million).

Stunting can overall affect India’s human capital, poverty, and equity. Children with stunting tend to get less opportunities in life and the World Bank says, “A 1% loss in adult height due to childhood stunting is associated with a 1.4 percent loss in economic productivity.”

India is the country with the most wasted children (25.5 million), followed by Nigeria (3.4 million) and Indonesia (3.3 million).

Additionally, India is one of the nations with more than a million overweight kids. China, Indonesia, Egypt, US, Brazil, and Pakistan round out the list of other countries.

More over a fifth of youngsters in four nations – Ukraine, Albania, Libya, and Montenegro – are overweight.

In its effort to “eliminate all forms of malnutrition by 2030 for children under 5,” India has not made as much progress as it could have.


What are the Government Initiatives to Improve Malnutrition

The Government has given the problem of malnutrition top priority and is implementing a number of programmes like the Pradhan Mantri Matru Vandana Yojana (PMMVY) under the umbrella of Integrated Child Development Services (ICDS) Scheme as direct targeted interventions to address the issue of malnutrition among children.

The government has established ‘Nutrition Rehabilitation Centers’ under the Ministry of Health and Family Welfare, where children with severe acute malnutrition are treated (5✔ ✔Trusted Source
Malnutrition among Children

The National Nutrition Mission or POSHAN Abhiyaan that was launched in 2018 by the Prime Minister wishes to address the problem in a mission-mode.

What can be Done to Improve India’s Nutritional Status?

Monkeypox can also be transmitted through the air Norovirus, Stomach virus can be spread through saliva Polio cases return after a decade in the US