A three-year-old girl miraculously survived a kindergarten massacre in Thailand after sleeping through the ordeal of being covered with a blanket.

Paweenuch Supolwong emerged peacefully after former policeman Panya Kamrap killed 36 people, including 24 preschool children while they were napping, during attack on Thursday.

She is believed to be the only person to escape injury after violence broke out at a day care facility in the rural town of Uthai Sawan, in Thailanddeadliest serial killer.

another boy, Sumaee, stabbed and shot twice but survived after skilled neurosurgeons removed two bullets from his head.

Paweenuch was in a deep sleep and was facing a wall when the attacker burst into the building and did not see or hear the attack.

She survived because Kamrap, 34, believed she was dead, her mother Anonpai Srithong said.

Rescuers carried the three-year-old girl out of the center with her eyes covered to avoid her having to witness the horrifying scene of carnage.

Her best friend, who was sleeping next to her, was one of the victims of the tragedy.

Ms. Srithong described her relief after learning that her daughter was still alive.

At the time, she and her husband were working in an electronics factory in Bangkok, nearly 500 miles from Uthai Sawan.

The couple moved to the Thai capital for work, leaving their three-year-old in the care of their grandmother, but made a panicked journey back to town after the attack.

Ms Srithong told the AP news agency: ‘I can’t describe the difficulty of breathing, but when I found out my baby was alive, I breathed a sigh of relief.

“But I also want to know if she’s hurt, is there any damage.”

Ms. Srithong said her cousin was also killed in the massacre.

“There’s luck in the bad luck – I’m lucky my baby is okay but I lost my cousin,” she said.

“For some people, some lose their only child as their hope.”

Ms. Srithong and her daughter attended a ceremony at a Buddhist temple to pay respects to the victims. 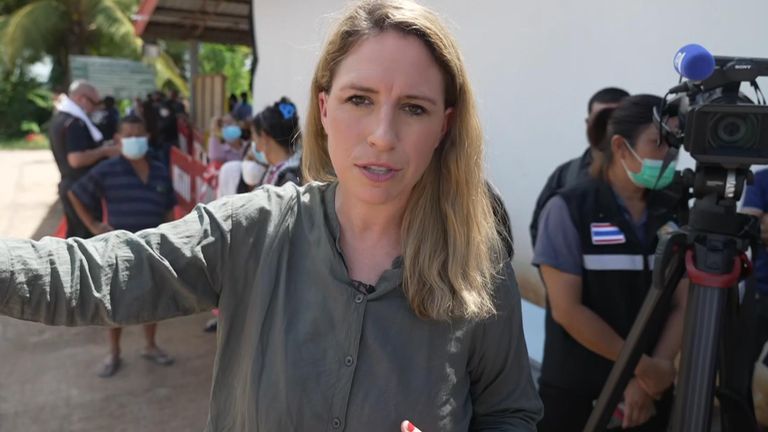 The scene of the massacre in Thailand

Mourning people flocked to Paweenuch, tying dozens of white, yellow and red “soul ropes” around her wrists in hopes of helping her soul survive the atrocities.

They believe that a person will lose a part of their soul when they go through such a tragedy.

“It was to put the spirit back in her body,” her mother said.

“It’s like the soul has left the body and it’s being called back.”

Nanticha Panchom, the teacher who runs the day care center, was in the kitchen when she heard gunshots outside.

“I never thought he would come in,” she said.

“I can’t even imagine what this lost generation will mean to the community.”

Police identified the attacker as Kamrap, who was fired for drug use.

He continued his murderous behavior after leaving the nursery, before shooting his wife and child dead at home then turning the gun on himself, police said.

The Thai government is compensating families to help them cover funeral costs.

A team of trauma specialists has been dispatched from Bangkok to work alongside local mental health professionals to help the victims. How ‘The Bear’ Helped Abby Elliott Leave SNL Pressure Behind