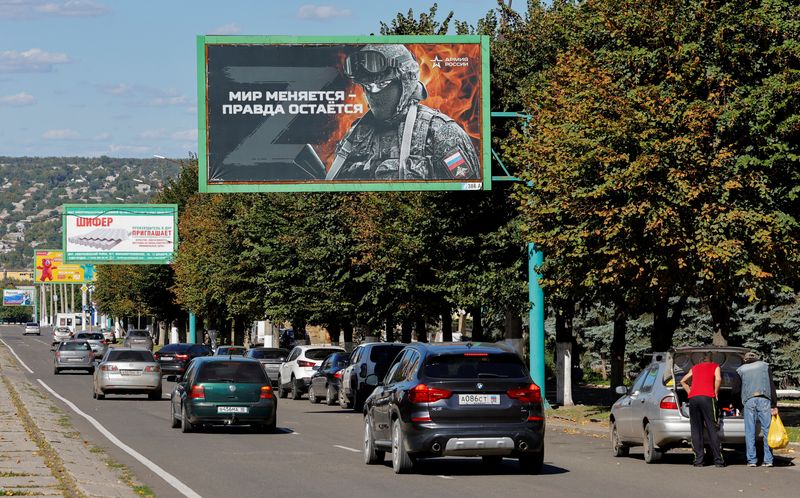 © Reuters. Vehicles drive past billboards, including those displaying pro-Russian slogans, on a street during the Russian-Ukrainian conflict in Luhansk, Ukraine September 20, 2022. One of the signs reads. : “World changes – the truth remains. Russian army”. CHEAP

By Pavel Polityuk and Michelle Nichols

In an apparently coordinated move, pro-Russian figures announced September 23-27 referendums in the Luhansk, Donetsk, Kherson and Zaporizhzhia provinces, which account for about 15% of Ukraine’s territory, or an area about the size of Hungary.

“The Russians can do whatever they want. That won’t change anything,” Ukraine’s Foreign Minister Dmytro Kuleba said on Tuesday in response to a question from reporters at the United Nations. , where leaders arrive for a General Assembly meeting dominated by the war in Ukraine.

In a tweet, he added: “Ukraine has every right to liberate its territories and will continue to liberate them whatever Russia may say.”

If the referendum plan “wasn’t so tragic, it would be funny,” French President Emmanuel Macron told reporters ahead of a United Nations meeting in New York.

Russian President Vladimir Putin on February 24 ordered what he called a “special military operation” in Ukraine aimed at rooting out dangerous nationalists and “transforming” the country. . The war has killed thousands, destroyed cities and displaced millions from their homes in the former Soviet republic.

German Chancellor Olaf Scholz said Putin would only give up his “imperialist ambitions” that threaten to destroy Ukraine and Russia if he realizes he cannot win the war.

“This is why we will not accept any peace ordered by Russia and this is why Ukraine must be able to withstand a Russian attack,” Scholz said in the speech. first before the General Assembly.

Japanese Prime Minister Fumio Kishida told Congress that the credibility of the United Nations was at stake because of aggression by Russia, a permanent member of the Security Council, and that the council needed to be reformed.

“Russia’s invasion of Ukraine is an act of trampling on the philosophy and principles of the UN charter… It should never be tolerated,” Kishida said.

Some pro-Kremlin figures see the referendums on the occupied regions as an ultimatum for the West to accept Russia’s territorial interests or face an all-out war. with a nuclear-armed enemy.

Dmitry Medvedev, former Russian President and now Vice Chairman of Putin’s Security Council, said on social media: “Encroaching on Russian territory is a crime that allows you to use all the forces of self-defence.

The staging of skirmishes on occupied territory as an attack on Russia could give Moscow a reason to mobilize its 2 million-strong military reserve. So far, Moscow has resisted such a move despite the mounting losses.

US National Security Adviser Jake Sullivan said Washington was aware of reports Putin might be considering ordering the deployment of troops. Mr. Sullivan said that would not undermine Ukraine’s ability to repel Russian aggression, adding that Washington had rejected any such referendum “unequivocally.” “.

Russia has considered Luhansk and Donetsk, which together make up the Donbas region that Moscow partially occupied in 2014, as independent states. Ukraine and the West consider all areas of Ukraine held by Russian forces to be illegally occupied.

Russia now holds about 60% of Donetsk and captured almost all of Luhansk in July after making slow advances during months of intense fighting.

Those interests are now at stake after Russian forces were driven out of neighboring Kharkiv province this month, losing control of their main supply lines to much of the Donetsk and Luhansk front lines.

Ukraine’s position has not changed because of “some noise” from Russia, Zelenskiy added in a reference to the referendums.

At Kherson, where the regional capital is the only major city Russia has captured so far that has remained intact since the invasion, Ukraine launched a massive counter-offensive.

To the south, Russia controls most of Zaporizhzhia, including Europe’s largest nuclear power plant. The plant operated by Ukrainian employees was damaged by shelling, raising fears of a radioactive disaster.

Ukraine’s nuclear energy company Energoatom said power to unit 6 of the plant was interrupted by shelling early Wednesday morning, requiring the start of two emergency generators for safety systems. to ensure the operation of the fuel cooling pumps.